Jack of All Trades, Master of Some 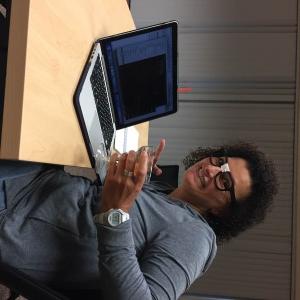 Being a lifelong Type A personality, I’ve always had a direction in life. From a young age, I knew I wanted to work at a newspaper. After graduating from college with a journalism degree, I did a couple of editing and page designer stints at newspapers. Then I had the opportunity to veer off my chosen career path and get into IT. I always felt good about that decision but I missed some of the creativity that came with my journalism background. Nevertheless, my Type A self plowed on ahead into the IT field, gaining experience in everything from systems administration to coding to SDLC project management. I crafted a very successful career for myself. But it was not fulfilling in the way I’d hoped it would be at this point in my life.

I never thought that I’d be celebrating a recent 40-year-old milestone birthday and having a career midlife crisis of sorts – trying to figure out what I want to be when I grow up. I dabbled in HTML, CSS and some Javascript years ago when I was on a project team rolling out a new content management system at a newspaper. It was definitely something I enjoyed because it fed the creative right side of my brain and the technical left side of my brain. But I never had the chance to pursue it further.

As I’ve pondered lately what I ultimately want to be doing to be happy again in my career, the idea of becoming a full-fledged developer keeps rearing its head. It is an intimidating and exciting thought all at the same time. I recently got involved in the Cape Fear Women In Technology group and heard about a pop up code bootcamp being offered in Wilmington through Tech Talent South.  It sounded like the perfect opportunity to dip my toe back into the world of code … and, indeed, it has been.

The first few days of class were a refresher for me in HTML and CSS. It gave me great confidence to realize that I hadn’t forgotten everything I learned years ago. From there, it was a seamless transition into the very new topic of Ruby on Rails. It was easy to connect the dots between all of the stuff we learned in a very short timeframe because the instructors made us do it over and over again.

For the first time in a long time I am excited about how I can use these skills in either a brand new career in web and app development or expanding my knowledge base for continuing project management. Additionally, I have made some great networking connections among my TTS classmates and instructors.

As they say the first 40 years of childhood are always the hardest. In the next 40, I’ll be making up for lost time … starting with becoming a code junkie.