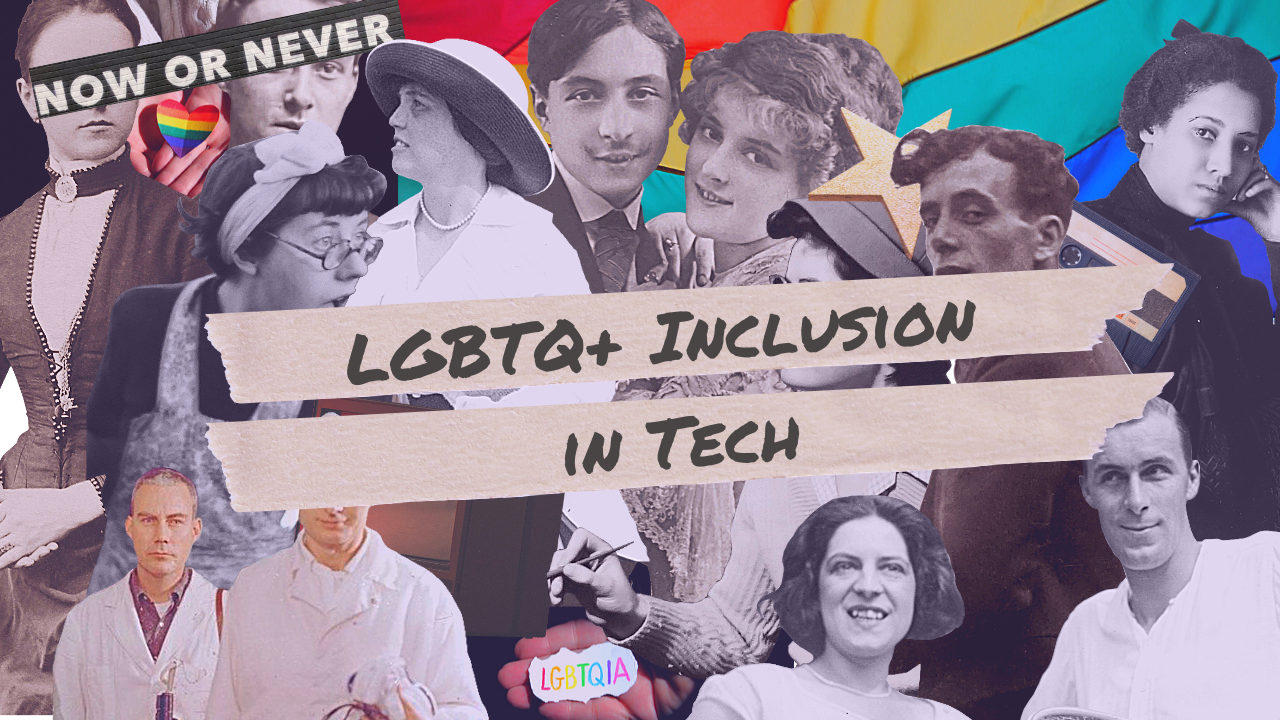 LGBTQ+ people have long faced barriers in the tech industry. While great strides for equality have undoubtedly been made in the last several decades, LGBTQ+ folks still face structural inequality, discrimination, and harassment in the tech industry, just as they do in other industries and in the world at large. It’s important that we acknowledge the historical biases and discrimination that LGBTQ+ people have faced, and allow them to inform us as we work to create a more inclusive tech industry for all.

Many of us think of the tech industry as one of the more welcoming industries for LGBTQ+ people. Tech’s forward-thinking, progressive image has certainly helped its reputation as a queer-friendly space. But queer folks in tech don’t always feel quite comfortable in their work environment as their non-queer coworkers might expect. Barriers remain, and the legacy of anti-LGBTQ+ sentiment at work still lingers in unconscious biases and structural inequalities.

We can’t talk about the state of LGBTQ folks in tech without mentioning some of the pioneers who made representation and equality possible through their hard work. But before we discuss some of these noteworthy folks, we also have to acknowledge the fact that due to the omnipresent danger and hatred queer people lived with for so much of history, many queer leaders in technology went, and will go, without recognition. For fear of legal and social consequences, many queer folks in history had to hide their sexuality and/or gender identity from the world, presenting as straight and cisgender in order to stay safe. The historical documents that remain for us today and that can help clarify questions of a historical figure’s identity are often the last place a queer person would be free to acknowledge their true identity. The cost of having their vulnerability in writing was simply too great for most.

We also have to consider the other historical biases that contribute to the erasure of queer folks from history. Sexism often prevented women from obtaining formal education that could allow them to pursue their passions for math, science, and technology. People with mental illnesses or disabilities were shunned by society and feared, rather than supported and offered compassionate care. People of color were oppressed, abused, and enslaved. Many others experienced discrimination and oppression that prevented them from accessing opportunities in technology.

For these reasons, our understanding of queer history is, and likely always will be, limited. Those queer people who were able to form relationships or express their gender identities were usually forced to live in secret, and therefore their names and stories are lost to history. It is their stories that we must remember when we consider the ways in which LGBTQ+ people experience discrimination today, for the legacy of that oppression and hatred remains.

I do want to call attention to a handful of notable queer folks who have paved the way for LGBTQ+ folks in technology, and whose innovation is a valuable piece of technology history.

Alan Turing was one of the most famous queer folks in the history of technological innovation. One of the pioneers of artificial intelligence and early computing, Turing worked in code breaking during the Second World War. He is credited with having overseen the efforts to decode the Nazis’ Enigma Machine, hastening the end of the war and saving countless lives. He shaped the way humans interact with technology and imagined the relationship we would have with computing systems long before computers as we know them existed. Tragically, despite his innovative work and heroism during WWII, he was criminally charged for his homosexuality in 1952, and as a result of his conviction, was forced to undergo chemical castration. He died just two years later in 1954 after eating an apple that was laced with cyanide. Whether his death was suicide or accidental is unknown. We only know the massive impact Turing’s work had on the evolution of modern computing, even in the face of horrific treatment from the country he worked so hard to protect.

Lynn Conway is one of the most influential trans folks in technology history. Conway’s research in microelectronic chip design and computer architecture were fundamental to the development of modern computing. Following her transition in 1968, IBM fired Conway, forcing her to rebuild her career as she lived in fear of being outed again. Despite the barriers she faced, Conway

excelled and worked at companies such as Memorex, Xerox PARC, and DARPA, eventually joining the University of Michigan as a professor.

Dr. Sally Ride is widely known as the first American woman to go to space. She held a doctorate in physics and joined two separate space flights. Following the Challenger tragedy in 1986, she was involved in the accident’s investigation and is credited with holding NASA accountable for its lapses. After her retirement as an astronaut, she taught physics at UC San Diego and eventually founded Sally Ride Science, a program which encourages young girls to pursue their interests in science. When Dr. Ride passed away from pancreatic cancer in 2012, she was survived by her partner of 27 years, Tam O'Shaughnessy. In 2013, President Obama posthumously awarded Dr. Ride the Presidential Medal of Freedom and asked O’Shaughnessy to accept it in her stead.

Since Turing, Conway, and Dr. Ride pioneered in their respective fields of technology, American culture has made great strides for queer acceptance. Being “out” at work is no longer a guarantee of social isolation and possibly losing one’s job; in fact, many tech companies participate in LGBTQ pride and have pride groups to support LGBTQ employee wellness. It is through the work of many queer folks in history who fought prejudice, fear, and hatred that we have made progress towards true equality.

Though discrimination and prejudice still exist in many forms, civil rights have also improved for people of color, folks with disabilities, women, and others. These improvements, while still

inadequate, have allowed for more diverse and equal participation in pride events. Better conditions for LGBTQ folks across the country, including nationwide legal same-sex marriage, have shifted focus to trans rights and trans women of color as they fight racism, transphobia, and violence. Likewise, activists are reevaluating the common narrative of queer history, noting that the stories of queer people of color are often lost or untold, and that landmark events in queer history tend to be white-washed, from Stonewall to the AIDS crisis.

There may have been significant progress in the last several decades, but we still have a long way to go. Let’s talk about how this history of oppression against queer folks lingers at work in the tech industry today, and what we can do about it.

Despite the progress we’ve made, the United States still lacks explicit, national anti-discrimination law protecting LGBTQ+ people. This means that in states without protective local laws, a person could be not hired, fired, or denied housing because of their sexuality and/or gender identity. And though the Supreme Court ruled last year that employees cannot be fired due to their sexuality or gender identity, because no national law explicitly protects these groups from discrimination, queer folks may have to deal with lengthy and expensive lawsuits in order to get justice.

We cannot truly call ourselves equal at work until queer folks are protected against this prejudice.

Inclusive language is one vital component of creating a positive, supportive work environment for LGBTQ+ folks. You might think your organization employs inclusive language, but does it really? Are your job descriptions filled with gendered language? Does the jargon of your industry rely on old-fashioned, sexist phrases that are crude or vaguely sexual? Do your employees understand that they are expected to respect others’ chosen pronouns?

Inclusive pronouns and gender-inclusive language may seem like small steps compared to some of the barriers LGBTQ+ people have faced in the past. But dealing with the daily discomfort of language that excludes and discriminates can cause a sort of ‘death by a thousand cuts, as the saying goes. Seemingly small moments of unfairness contribute to the mental burden that queer people and minorities are forced to bear simply to get through the workday.

You may have heard about so-called bathroom bills, designed to exclude trans and gender non-conforming people from safely using the restroom. Is your office bathroom policy trans-inclusive? Trans people often have to worry about their basic safety when they use the bathroom associated with their gender identity. Make sure your employees understand that trans employees are welcome to use the bathroom associated with their gender identity. You can also make your office more inclusive by switching some or all of your restrooms over to unisex restrooms.

Tech Companies: Are your products good or bad for queer people?

Your organization may have a diversity and inclusion committee; it may have policies in place to protect its queer employees and foster a safe, inclusive, intersectional environment. But have you also considered how the day-to-day operations of your company affect LGBTQ+ rights in general, in the outside world?

There is more to LGBTQ+ inclusion than simply participating in pride parades. Are the products you create made with the same gender-neutral and inclusive language your D&I committee recommends? Tech companies shape our culture, from their economic contributions to the way they change how we interact online. GLAAD, an LGBTQ+ rights organization, recently released a survey of how some tech companies fail to uphold queer rights on their websites. Does your company permit anti-LGBTQ content to go unchecked? Social responsibility is an important component of inclusion as we move closer to true equality for all, at work and in our personal lives.

Though we’ve made much progress from the repressive, anti-LGBTQ laws and social norms of the past, anti-LGBTQ, racial, and gender biases remain common, and in many cases, they are literally coded into the tech industry. We all must do our part to educate ourselves about the invisible history of queer folks, both in technology and in the world at large, and to fight to extinguish the remaining vestiges of that prejudice that continue today.