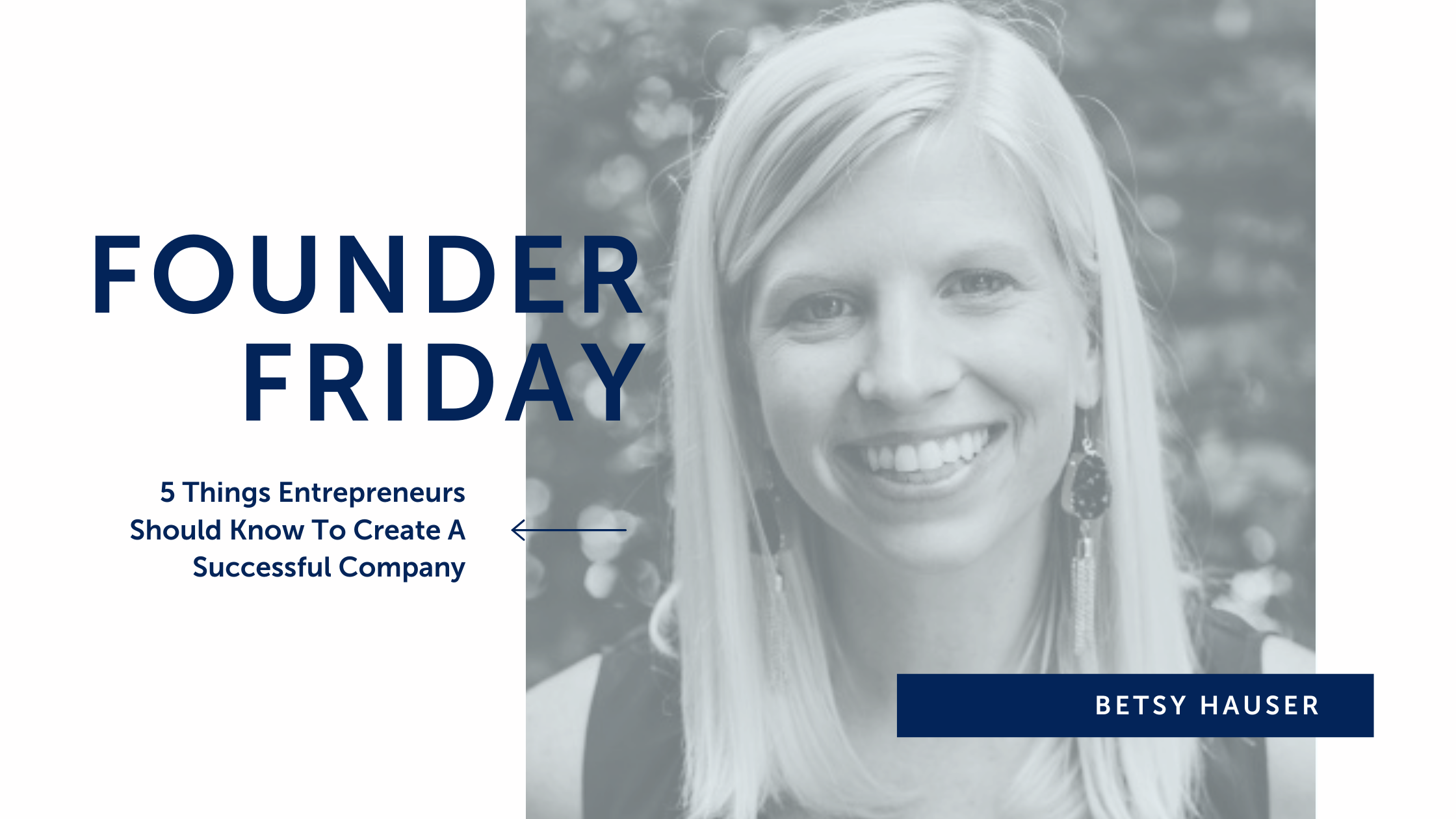 Betsy Hauser is the CEO & Founder of Tech Talent South (TTS), a WBENC-certified technology recruitment, training, and staffing company that believes in the power of diversity and matching companies to the best talent. Before starting TTS, Betsy ran a Charlotte-based product development company, which merged with innovation giant, Enventys in 2012. Betsy has been named one of Charlotte's 12 Innovators by Ernst and Young, Most Admired CEO, Woman in Business, Emerging Leader CIO, Charlotte’s Seven to Watch, and Charlotte Business Journal’s 40 under 40.

Today Betsy joins us for Founder Friday to discuss her advice on the five most important things one should know to create a successful company.

The first and most important thing is that you just have to do it. So many people talk about it. Starting something feels overwhelming, but it’s actually simple - you just need the gumption.

2 - Hire People Smarter Than You

I say this all the time - I have hired people that are so much smarter than me. Hire an incredible team and then empower them to do their jobs and let them own it. That’s where we are at TTS, “This is yours. You need to own it.” When you start a business, you’re doing everything; giving up that control is hard, but you have to do it to scale.

3 - Mentor and be mentored

I have been so lucky to have people who have been through these experiences help to guide me along my own journey. It’s almost as if they can see into the future. They also have a unique appreciation for what you’re building and doing. If I tell someone at a Fortune 500 company a big win I had, they may nod their head, but if I tell a successful entrepreneur, they are like, “WOW” - they know what went into that. It’s everything to me. I meet with these people all of the time. I have mentors at different stages too.

Dave Jones is one of the most successful entrepreneurs in Charlotte, and he’s two decades ahead of me in success. Then I have friends, John Espey (previously at Levvel and now at his own company Defiance Ventures), he’s a friend and a mentor - he’s 5 years down the road. Then I have friends that started a year or two after me, so we’re all learning from each other. I’ve seen things that they haven’t seen yet. For example, I called one of them last week and asked her if she’s registered as a woman-owned company yet.

4 - Be ready for the long haul

When you start a business, you hear a lot of people talk about selling it in a few years. I had the same silly expectations - but you need to brace yourself. If you’re going to build a successful company, you are in for the long haul. You’re in it for a substantial amount of time. Set your expectations early. You will be working more than full-time.

There is this misnomer that if you own your own business, you’re gifted with incredible flexibility. And sometimes, yes, but most of the time, no. There are no words for the amount of time I spend thinking about TTS. It can be all-consuming. And don’t get me wrong, I love it, but it’s no walk in the park.

Don’t raise capital right away. It sounds sexy, but you lose control (some or a lot), and then you’re tied. I think giving up control early on can hurt the business. Debt is a slippery slope for individuals and companies. Typically once you get some, you need more.

I did this thing early on when I talked to successful people. I would just do whatever they said like it was gospel. It took me years to understand that my folks aren’t right 100% of the time, no matter how well-intentioned. I am the person who said that I should build this company, and I have to trust that vision above all else.

You are welcome to ask for advice, and they are welcome to give it. However, it’s up to you if you decide to take it. Make sure you put space in between the learning and the doing to give yourself time to decide if it’s right for you right now. If not, great. If it is, great. And if you’re not sure - give yourself more time.