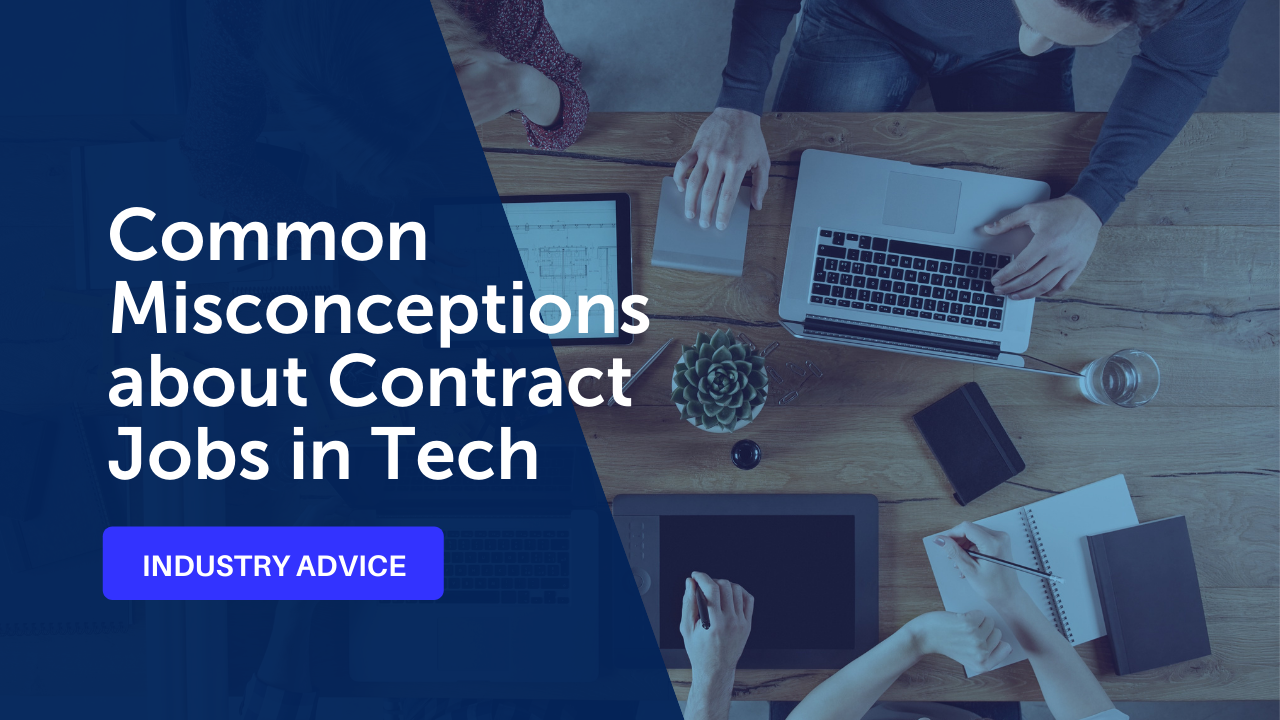 Many of us hold harmful assumptions about contractors and contract work. Why? The contract employment landscape is constantly changing, so many guiding resources like university career advisors don’t have updated information. There’s a lot of false or misleading information out there, and in many cases, it’s preventing talented people from reaping the benefits contract jobs have to offer!

Let’s go through some of the most common misconceptions about contract employment, and why it might be a good idea to consider a contract job in the tech industry.

It depends on the position, of course, but employers often recognize that contractors carry slightly more financial risk than traditional employees, due to the end date on their employment. In return for taking a job that carries a little more risk, contractors can get paid more than their employee counterparts in many cases!

Misconception: Contract jobs are only available for unskilled workers.
Truth: Many highly skilled workers work on a contract basis.

Contract jobs are not just for hospitality and construction workers! People in all different types of industries choose to work on contract for more flexibility and the chance to test out new industries. In fact, the tech industry runs on hard-working, creative contract workers.

It’s true that some contract jobs don’t offer benefits like health care coverage, disability insurance, and 401k matching. This is something we see more often with less-skilled contract jobs and contracts that employ workers for fewer than 40 hours per week. But thanks to urging from the contract worker community, many employers and agencies do offer benefits to their contractors, despite their contract status. Benefits are becoming more common by the day. We also have to consider the other benefits contract jobs offer. Like any job, there are tradeoffs and invisible expenses. If you take a remote contract job, you’ll save money on commuting, car maintenance, and work clothing. Depending on where you live and your lifestyle, that might offset the cost of lacking a 401k match, for example.

On paper, a contract job may look like a short-term gig. And in many cases, that’s true. In fact, the short-term nature of contract jobs is one thing that draws many people to this type of job. For those of us looking for flexible work, or who want to explore multiple industries and job duties, contract jobs can be very appealing.

But if you’re looking for a long-term position, contract jobs can be a great way to get your foot in the door, especially if you want to work at a tech company with a super competitive candidate pool, like Amazon or Google. If what you want eventually is a full-time, permanent position, contract-to-hire may be a great fit for you. This is a type of contract job that offers the potential for permanent employment at the end of the contract, depending on your performance. Even if you’re a contractor rather than on contract-to-hire, opportunities still exist for you to spin your temporary employment into a long-term gig. By working as a contractor, you can network with your teammates, expanding your ability to score a permanent gig later on.

Misconception: Contract jobs aren’t as good as traditional full-time employment.
Truth: Contract jobs come with their own benefits and challenges, just like any job.
There are some people who would try to tell you that contract jobs aren’t as good, as respectable, or as worthwhile as traditional permanent employment. But you have to weigh the pros and cons with what you’re specifically looking for from an employer. If you want flexibility, the chance to experiment with different employers, and networking opportunities, a contract job might be perfect! If you aren’t sure what exactly you want, contract jobs can also be a great fit, because they inherently include more change and chance to test things out without committing to a permanent position.

Just because contractors are, by definition, only with a company for a set period of time, doesn’t mean they are replaceable— far from it! Contractors bring invaluable skill sets to the companies they work with. Because their work history is often varied thanks to changing jobs more often than average, contractors have often picked up many unique and helpful skills that can be super useful to their teams. Additionally, we all know that teams can become incredibly insular, perpetuating the same ideas and subtly punishing anyone who deviates from the group mindset. Cohesion is great, but this kind of groupthink can limit a team’s growth, performance, and creativity. Contractors can bring an objective perspective and an individual creative approach, unhindered by years of history with the company.